We thank Roger C. from the We Agnostics group in Hamilton, Ontario  for compiling this list. 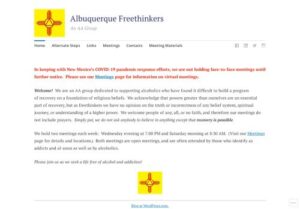 We are an AA group dedicated to supporting alcoholics who have found it difficult to build a program of recovery on a foundation of religious beliefs. 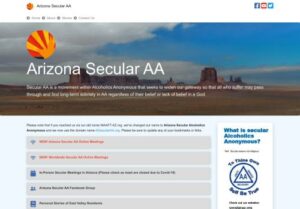 Secular A.A. is a movement within Alcoholics Anonymous that seeks to widen our gateway so that all who suffer may pass through and find long-term sobriety in A.A. regardless of their belief or lack of belief in a God. 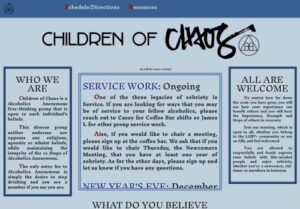 Children of Chaos is a Alcoholics Anonymous free-thinking group that is open to each individual’s beliefs. 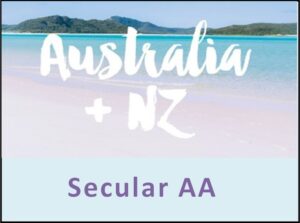 Our AA door stands wide open, (We) sign nothing, agree to nothing, and promise nothing. We demand nothing. (We) join on our own say-so… We do not wish to deny anyone the chance to recover from alcoholism. Bill Wilson 1946 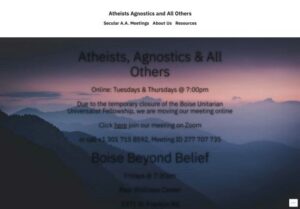 Boise, Idaho: Atheists, Agnostics & All Others

A group of recovering alcoholics who practice a more secular, non-religious approach to the program of Alcoholics Anonymous. 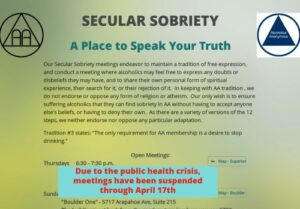 Our Secular Sobriety meetings endeavor to maintain a tradition of free expression, and conduct a meeting where alcoholics may feel free to express any doubts or disbeliefs they may have, and to share their own personal form of spiritual experience, their search for it, or their rejection of it. 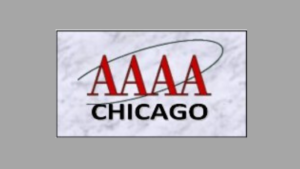 A.A. Members, especially newcomers, are urged to attend various meetings to find the meetings that are the most helpful to them. All A.A. Meetings have their own special characteristics. Quad-A is a collection of AA group meetings attended mostly by atheists, agnostics, and humanists in the greater Chicago area; however, anyone with a desire to stop drinking is welcome. 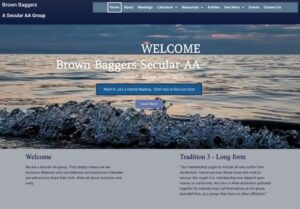 We are a Secular AA group. That simply means we are inclusive. Believers and non-believers and everyone in between are welcome to share their truth. We’re all about inclusion and unity. 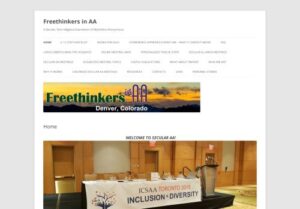 We are committed to helping others accept and practice the Twelve Steps of Alcoholics Anonymous in a supportive and accepting fellowship, emphasizing willingness, honesty and open-mindedness. 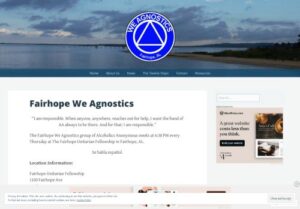 Our meeting of atheists, agnostics and freethinkers endeavor to maintain a tradition of free expression, where alcoholics may feel free to express any doubts or disbeliefs they may have, and to share their own personal forms of spiritual experience, their search for it, or their rejection of it. 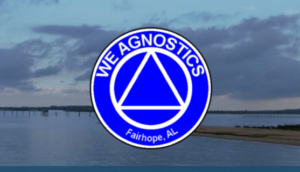 Alcoholics Anonymous is an international fellowship of men and women who have had a drinking problem. It is nonprofessional, self-supporting, multiracial, apolitical, and available almost everywhere. There are no age or education requirements. Membership is open to anyone who wants to do something about his or her drinking problem. 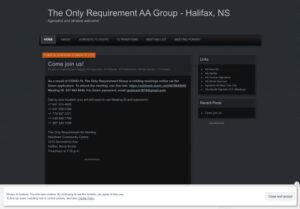 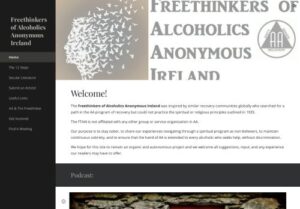 The Freethinkers of Alcoholics Anonymous Ireland was inspired by similar recovery communities globally who searched for a path in the AA program of recovery but could not practice the spiritual or religious principles outlined in 1939. 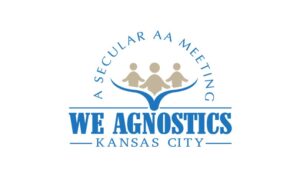 We Agnostics Kansas City is an Alcoholics Anonymous group in the Kansas City area. Our meetings are more secular than most, providing a supportive environment for anyone with a desire to stop drinking regardless of their religious or spiritual beliefs, or lack of belief. 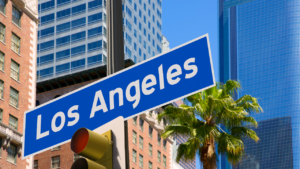 Los Angeles has a number of Alcoholics Anonymous groups that are helpful for agnostic/atheist members. Los Angeles AA groups have always stayed close to AA as a whole, and they the opportunity for people to immerse themselves actively in AA “without having to accept anyone else’s beliefs or deny their own.” 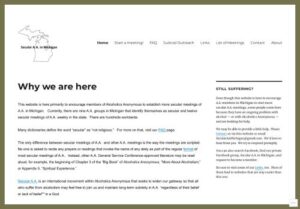 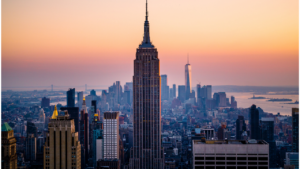 A collection of meetings of Alcoholics Anonymous in New York City for recovering alcoholics who prefer an alternative to the emphasis on religion and Higher Power commonly encountered in most A.A. meetings. 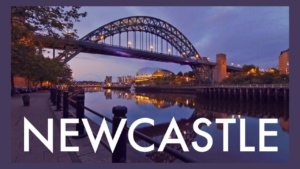 Newcastle upon Tyne UK: Beyond Belief

Set up in 2019 as a complimentary meeting to the the many and varied AA meetings within the Tyne and Northumbria Intergroup, Beyond Belief is a welcoming meeting where we endeavour to maintain a tradition of free expression, and conduct a meeting where alcoholics are able to express any doubts or disbeliefs they may have, and to share their own personal form of spiritual experience, their search for it, or their rejection of it. 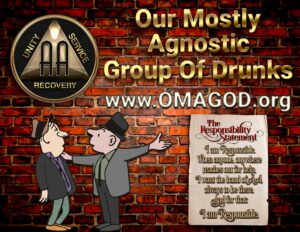 A lot of people have a problem with “the God thing” when they seek recovery in Alcoholics Anonymous. Problems with their previous experience with religion, the way they were brought up, the way God seems to treat them – these are all things a potential member must face when they first reach the doors of A.A. 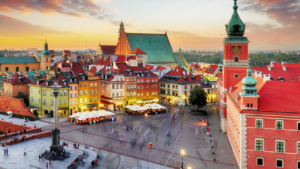 Pragnę: pogody ducha, abym godził się z tym czego nie mogę zmienić, odwagi, abym zmieniał to co mogę zmienić i mądrości, bym odróżniał jedno od drugiego. I want: serenity, let me reconcile with what I can’t change, courage, let me change what I can change and wisdom, let me distinguish one from the other. 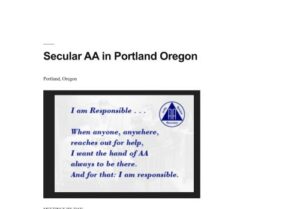 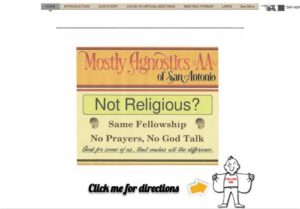 Most atheist and agnostic alcoholics assume that Alcoholics Anonymous is not for them based on what seems clear, that it is a religious program.  If they haven’t been able to solve their drinking problem on their own, this can be a heartbreaking situation.  However, there actually are atheists and agnostics in AA.  And they are sober – some of them for decades. 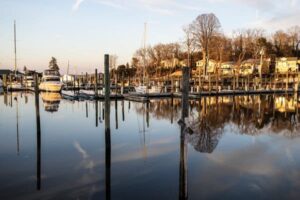 Stony Brook Freethinkers is a free thought group of Alcoholics Anonymous. Our primary purpose is to stay sober and help other alcoholics achieve sobriety, to widen the gateway to recovery, and to help make AA ever more inclusive. 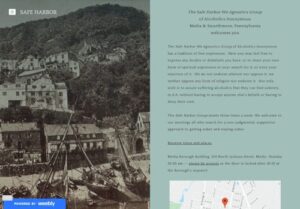 The Safe Harbor We Agnostics Group of Alcoholics Anonymous has a tradition of free expression. Here you may feel free to express any doubts or disbeliefs you have, or to share your own form of spiritual expression or your search for it, or even your rejection of it. 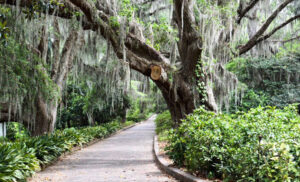 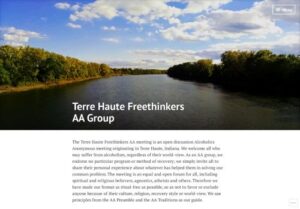 The Terre Haute Freethinkers AA meeting is an open discussion Alcoholics Anonymous meeting. We welcome all who may suffer from alcoholism, regardless of their world-view. As an AA group, we endorse no particular program or method of recovery; we simply invite all to share their personal experience about whatever has helped them in solving our common problem. 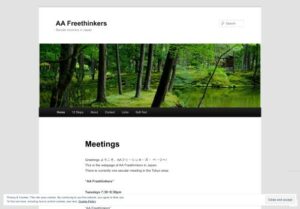 We have been holding weekly face-to-face Alcoholics Anonymous meetings in central Tokyo for several years. We have a number of freethinker, agnostic, atheist, secular humanist, rationalists who attend, so we keep things secular and don’t recite prayers at our meeting. Anyone is welcome, and we are not affiliated with any other group. 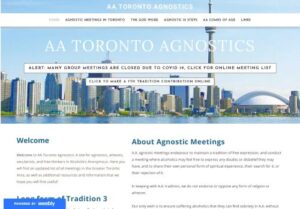 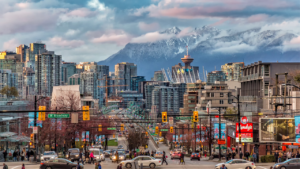 No one need have difficulty with AA meetings for those who do not believe in an interventionist deity. As the Big Book says: “Willingness, honesty and open mindedness are the essentials of recovery. But these are indispensable.” All are warmly welcomed to attend these agnostic and atheist AA meetings. 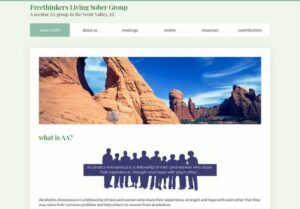 At Freethinkers Living Sober, we aspire to open-mindedness and to appreciating the sharing of others – particularly those with whom we disagree. We ask only that everyone share without attempting to dissuade, argue or disrespect anyone else. As freethinkers we attempt to maintain a tradition of free expression and conduct meetings where alcoholics may feel free to express themselves about their own experiences, beliefs, or feelings (including any doubts or disbeliefs they may have). As a group, we are secular. That is, we do not endorse or oppose any system of belief, nor do we have any quarrel with any form of religion. Our only wish is to assure suffering alcoholics that they can find sobriety in A.A. without having to accept anyone else’s belief or having to deny their own.

For more info e-mail us at freethinkerscottonwood@gmail.com