Members of secular AA and the International Conference of Secular AA 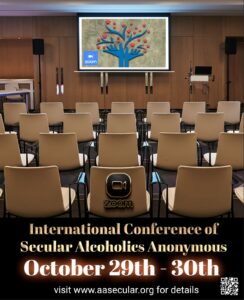 The International Conference of Secular AA (I.C.S.A.A.) has – for health reasons – cancelled the face-to-face gathering at the Hyatt Regency Bethesda (Washington DC). Instead, we will be hosting a virtual conference October 29th and 30th (free). This is due to COVID-19. Visit Facebook for updates

We will post program details and Zoom links closer to October 29th/30th.

NOTICE OF GENERAL MEMBERS MEETING FOR SECULAR AA (ICSAA)
Plan to attend: “General Members Meeting” Sunday October 30th 2022, 2 PM to 4 PM Eastern time. The board will make presentations, answer questions, ask question of the members. We will hear bids for future in-person ICSAA conferences. We will collectively vote in new board members (for two and four year terms). Descriptions of committee/board commission positions will be included in our discsussion.

Questions? Suggestions? Want to get involved? Email us at SecularAA@gmail.com

Our mission is to assure suffering alcoholics that they can find sobriety in Alcoholics Anonymous without having to accept anyone else’s beliefs or deny their own. Secular AA does not endorse or oppose any form of religion or belief system and operates in accordance with the Third Tradition of the Alcoholics Anonymous Program: “the only requirement for A.A. membership is a desire to stop drinking”

Secular AA recognizes and honors the immeasurable contributions that Alcoholics Anonymous has made to assist individuals to recover from alcoholism. We seek to ensure that A.A. remains an effective, relevant and inclusive program of recovery in an increasingly secular society. The foundation of Secular AA is grounded in our experience that anyone – regardless of their spiritual beliefs or lack thereof – can recover in the fellowship of Alcoholics Anonymous. Secular AA exists to serve the community of atheist, agnostic and freethinking AA members by supporting worldwide access to secular A.A. meetings and fostering mutual support within a growing population of secularly-minded people with alcohol use disorder.

Secular AA is defined as an Alcoholics Anonymous (“A.A.”) International Contact as described in A.A.’s Guidelines for Intergroup Offices: “an A.A. service office that involves partnership among groups in a community — just as A.A. groups themselves are partnerships of individuals. A central office is established to carry out certain functions common to all the groups —functions which are best handled by a centralized office —and it is usually maintained, supervised, and supported by these groups in their general interest. It exists to aid the groups in their common purpose of carrying the A.A. message to the alcoholic who still suffers.” Secular AA is part of the global A.A. community and therefore does not geographically limit the A.A. groups it serves and is accountable to.

It came from Britain, now in French, Spanish and English, The “God” Word: Agnostics and Atheists in AA

Alcoholics Anonymous is a fellowship of people who share their experience, strength and hope with each other that they may solve their common problem and help others to recover from alcoholism.

The only requirement for A.A. membership is a desire to stop drinking. There are no dues or fees for A.A. membership; we are self-supporting through our own contributions. A.A. is not allied with any sect, denomination, politics, organization or institution; does not wish to engage in any controversy, neither endorses nor opposes any causes. Our primary purpose is to stay sober and help other alcoholics to achieve sobriety.

Visit our PODCAST PAGE to Listen to speakers, panels and workshops from the International Conference of Secular AA

Learn how to start a secular AA meeting.

This was the great contribution of our atheists and agnostics. They had widened our gateway so that all who suffer might pass through, regardless of belief or lack of belief.

Listen to the audio recording of Dr. George Koob speaking at Virtual ICSAA 2020

Dr. Koob is an internationally recognized expert on alcohol and stress, and the neurobiology of alcohol and drug addiction. He is the Director of the National Institute on Alcohol Abuse and Alcoholism (NIAAA), where he provides leadership in the national effort to reduce the public health burden associated with alcohol misuse.

This is a recording of a talk he gave at the International Conference of Secular AA, held online on December 5, 2020. Dr. Koob was introduced by Gregg Ottinger, the Host City Chair for the upcoming conference in Washington, D.C. (learn more and register now). You can learn more about Dr. Koob at the NIAA website.
We are secular members of Alcoholics Anonymous
Donate Opens in a new tab